Philadelphia: The Birthplace of Freedom

The first Americans to live in the Delaware Valley were of the Lenape and Minqua Tribes. The Swedes founded the first European settlement in what is now Philadelphia in the 1640s. In 1655, fewer than 2,000 Swedes and Finns surrendered New Sweden to a Dutch expedition from New Amsterdam. However, in 1664 the Dutch surrendered New Netherlands to the English. Thereafter, the history of Philadelphia is inseparable from that of the Commonwealth of Pennsylvania. On March 4, 1681, William Penn received from King Charles II of England his charter for a colony to lay north of Maryland and west of the Delaware River. As a Quaker leader, William Penn planned his colony as a whole experiment where men of his own religious sect or other persuasions might find freedom of mind. Penn chose the peninsula formed by the flow of the Schuylkill into the Delaware River as the site for the capital of his colony.

He named the town after the city of Philadelphia in Lydia of Asia Minor. The name of that city, referred to in passages from the Book of Revelation, signified ‘brotherly love’. 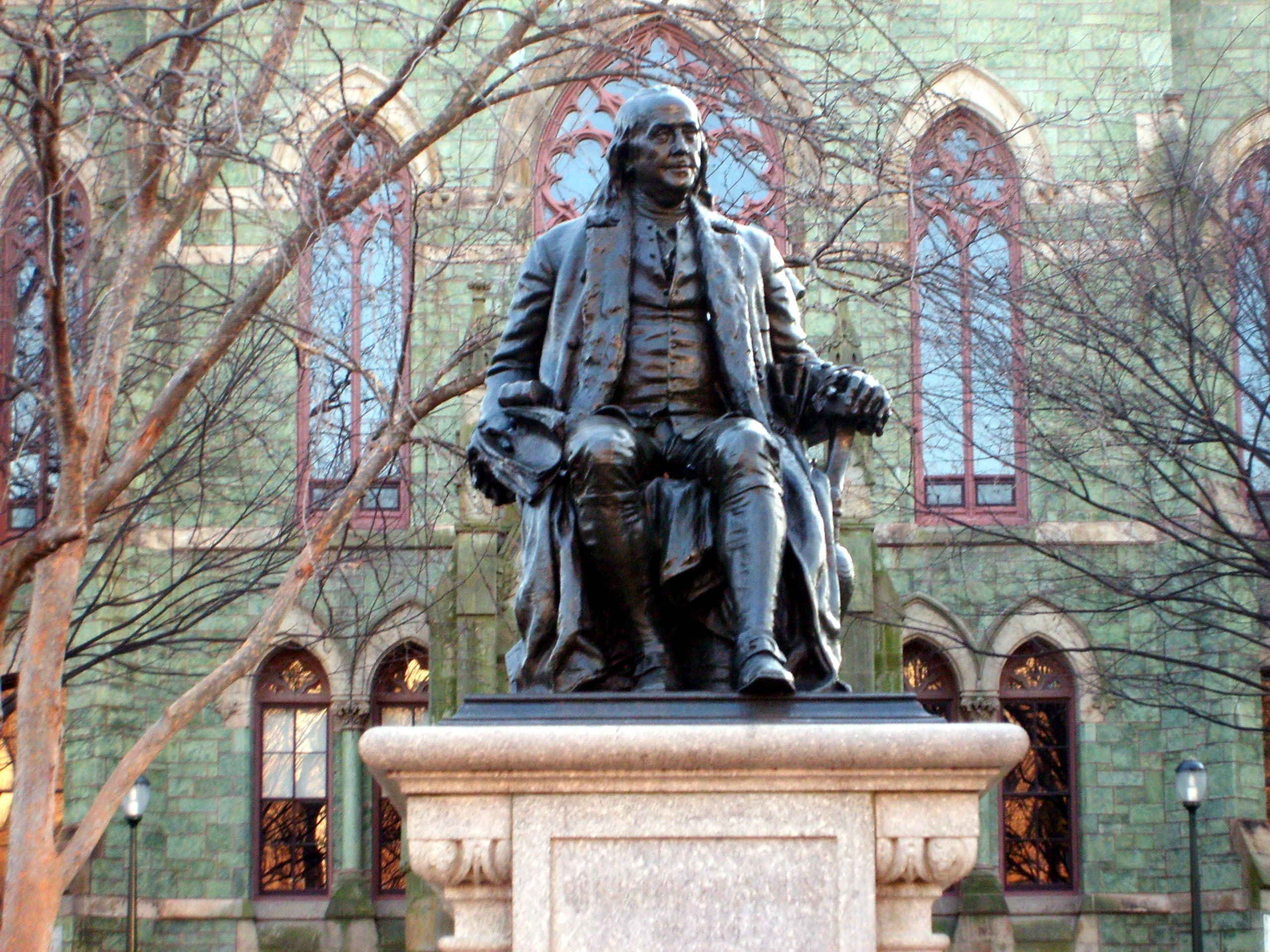 Statue of Benjamin Franklin on the University of Pennsylvania Campus 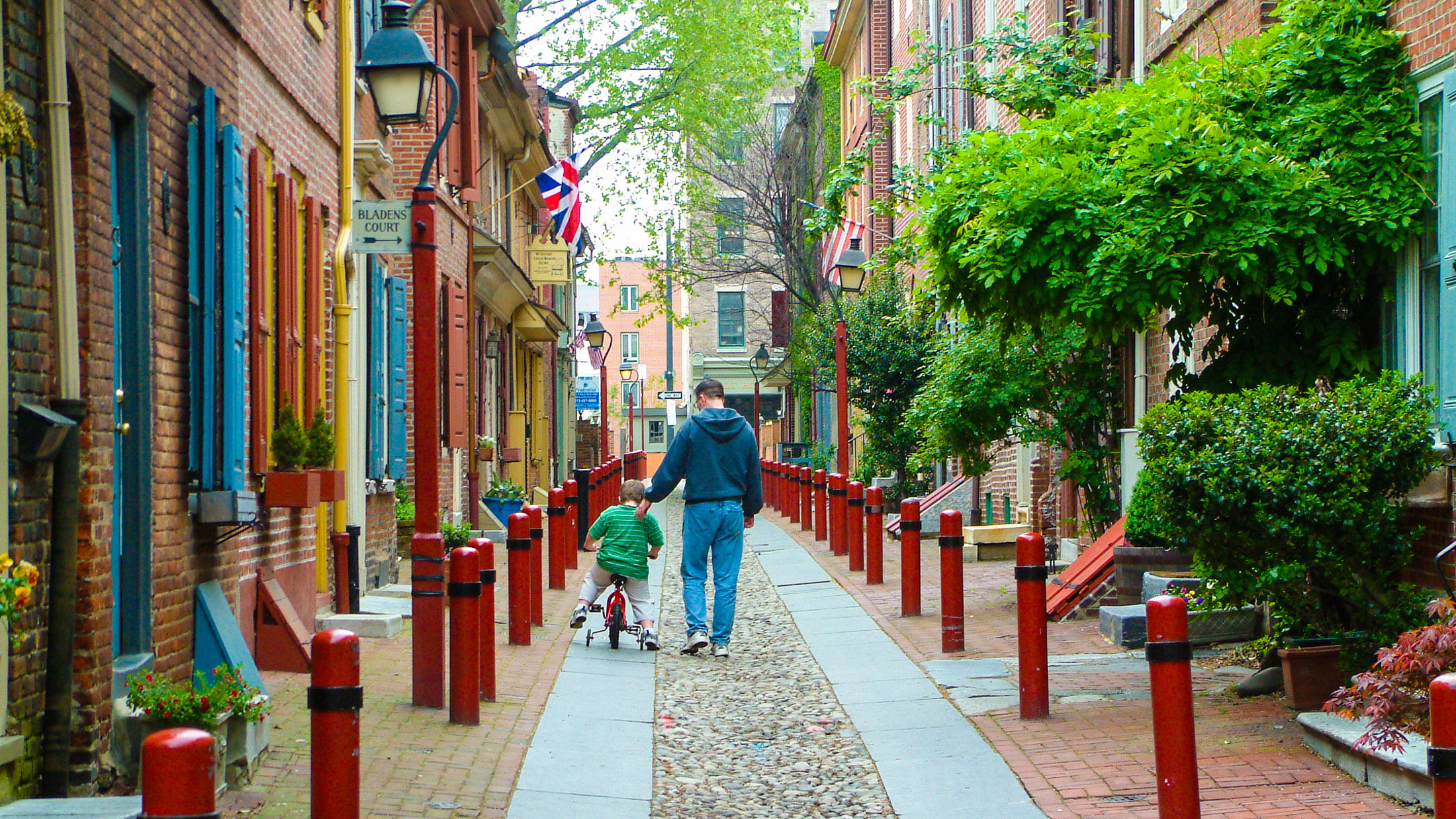 Philadelphia as the first capital of the United States is the site of the most historic square mile in all of America. Here are found the Liberty Bell Pavilion and Independence Hall where the Declaration of Independence was adopted in 1776 and the United States Constitution was written in 1787. Associated with this section of Philadelphia is Christ Church, which was attended by Benjamin Franklin, George Washington, Betsy Ross and a great many other historic figures. The Betsy Ross House and the First Bank of the United States founded under Alexander Hamilton are also in this area.

The 2700 acre Valley Forge National Park, is a major historic site. Here General Washington and his Continental Army wintered after defeats at nearby Brandywine Battlefield and the battle of Germantown. On this site, approximately 2,500 of the 10,000 revolutionary soldiers made the ultimate sacrifice for their country, dying of disease, hunger and exposure, while the British Army under General Howe resided in relative comfort in Philadelphia. 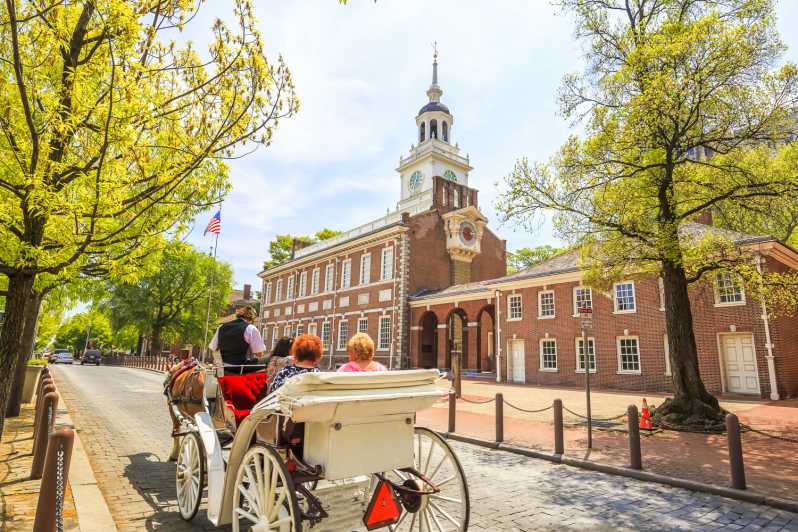 19th century Philadelphia prospered and grew during the Industrial Revolution, becoming one of the most productive manufacturing centers in the world prior to 1950. During this period Philadelphia attempted to sustain the artistic traditions begun by Charles Wilson Peale, and before him Benjamin West. There are in the city approximately 40 art associations, schools of art, museums and collections, public and private. The Pennsylvania Academy of Fine Arts (chartered 1805) of which Thomas Eakins was an instructor, is the oldest art institution in the United States and remains among the most distinguished in the country. Popular art museums in Philadelphia include the Rodin museum, which has more than 200 original statues, The Philadelphia Museum of Art, which is recognized, not only as a great art museum but also as an architectural site in itself, and the Norman Rockwell museum. Public art adorns the city with sculptures by Frederick Remington, Alexander Calder, Claes Oldenburg, Henry Mitchell and others.

Founded in 1876, the Philadelphia Museum of Art is among the largest art museums in the United States. It houses over 300,000 objects in its collection, and contains a research library of over 135,000 art books, periodicals, and auction catalogues, free to museum members, University faculty and graduate students, and visiting scholars.

For the musical arts, the world famous Philadelphia Orchestra, Peter Nero and the Philly Pops, Philadanco, and many others are resident companies at the newly built Kimmel Center on the Avenue of the Arts. The Opera Company of Philadelphia and The Pennsylvania Ballet performs and at the historic Academy of Music, built in 1857, and modeled on La Scala in Milan, is also on the Avenue of the Arts. The Pennsylvania Opera Theater as well as a great many other theaters of dance, music and drama are among the other advantages of life in the Philadelphia area.

The Franklin Institute founded in 1824 is a public museum devoted to the promotion of science and technology. Among other massive exhibits, they have a state of the art planetarium with a computer-controlled projector with outstanding graphics and special effects. The Franklin Institute’s Future Center illustrates visions of the future of electronics, as well as economic, technological and demographic changes, which are shaping our world.

The Academy of Natural Science, founded in 1812, is the oldest such institution in the United States and promotes appreciation of natural science. Throughout its history the Academy has sponsored numerous expeditions such as Admiral Robert E. Peary’s voyage of 1892 which proved Greenland is an island. The Academy of Natural Science maintains a display of numerous life-size robotic dinosaurs as well as interactive and live animal programs. University of Pennsylvania Museum of Archaeology and Anthropology

The University Museum, across the street from the University of Pennsylvania Medical Center, has a world-renowned collection of archaeological and anthropological artifacts. Displays range from the Sumerian period, the Egyptian period (including the preserved body of an Egyptian woman (c.3500 B.C.) to the Alaskan Indians and other 19th century subjects. The University of Pennsylvania Museum of Archaeology and Anthropology was founded in 1887. Collections include nearly one million artifacts from cultures throughout time and across continents.

Other attractions in Philadelphia include the United States Mint, the world’s largest mint, and the Philadelphia Zoological Gardens, founded in 1874, which is the oldest zoo in the United States. On display are more than 1,600 birds, mammals, reptiles as well as a petting zoo. Other general attractions include Chinatown, Penn’s Landing, the Italian Market and Reading Terminal Market. Finally, one of the greatest assets of Philadelphia is the general location. One can make outings to the Lancaster region, famous for the life style of the Amish farm people or one can go camping, skiing or hiking in the Pocono Mountains within two hours drive to the west. Eighty minutes to the east is the Jersey shore where in towns such as Cape May, one can enjoy everything from beautiful Victorian houses and clean salt water beaches to wild life preserves with salt marshes as habitat to a wide variety of migratory birds. To the south within a 25 minute drive is Longwood Gardens, a massive botanical garden with palatial fountains and buildings on an approximately 180 acre site, founded by Pierre Dupont. A nice feature about living in the Philadelphia area is the ease with which one can reach, by train or car, Washington, D.C., or Baltimore to the south, or New York City and Boston to the north. You will find the Philadelphia area to be enjoyable to live in as well as a place where friends will love to come to visit you.